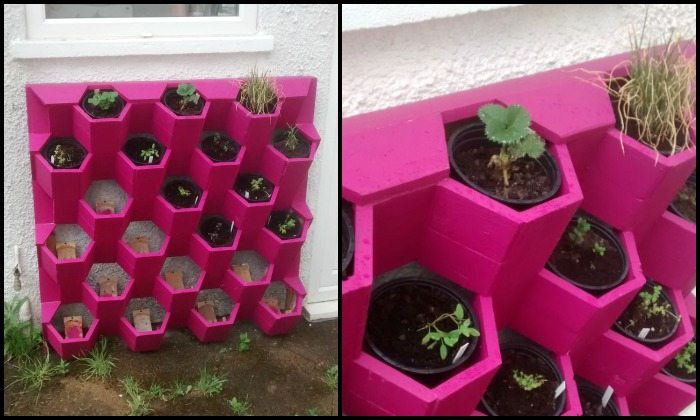 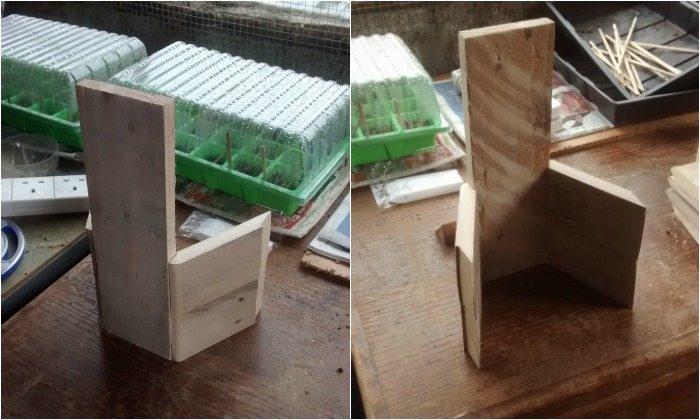 Assembling the body of the hive and adding braces: Each module was glued up separately, with tack nails to hold them until the glue dried. They were clamped as needed at this stage until dry. Each module was screwed to another with one 25mm drywall screw through each ‘side’ piece (a total of 4 screws per module). 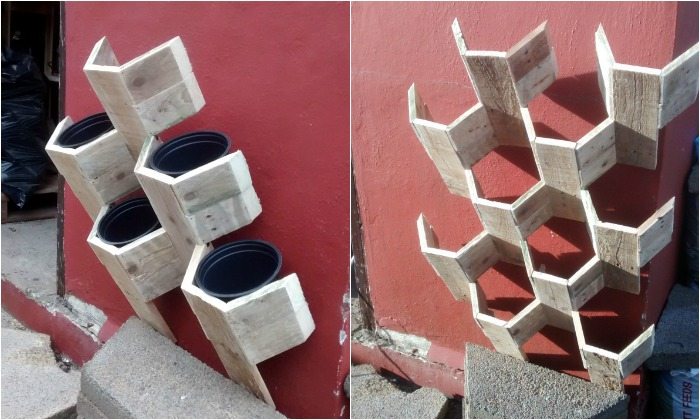 I actually assembled this in stages, assembling half a dozen modules, then putting them together. Then another half dozen modules, adding them to the growing hive. You’ll need a few clamps here. While I was assembling the body of the hive, it struck me that I needed some way to give the units a little more strength and something to give them a bit more shape. So I machined some hexagonal braces. 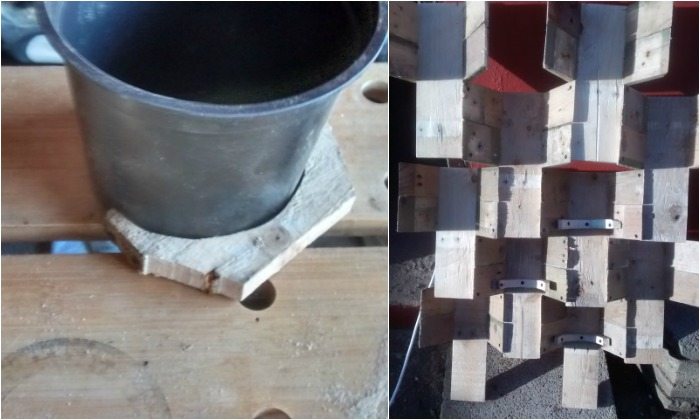 Each brace was made out of a 2.75″ by 6.5″ length of the board and was cut with two 60 degree angles. I also cut a circle out of the inside to allow my pots to sit in them comfortably. These also gave me a handy place to attach a shelf to hold the pots… These braces are not ideal, because two of the screws to attach them are running in the same direction as the grain. Drilling pilot holes, and going in at an angle here helped.

The shelves I used were just extra 6.5″ x 2.75″ pieces screwed up into the braces, though I did attach a block at the back of the shelves to stop the pots from being pushed backward – but I didn’t fit them until the next step.

My hive is 4 units wide at the widest, and 6 tall. That means that it has 4 modules on the floor, where the uprights needed to be shorter (5.5″ rather than 11″). I just cut a couple of my uprights in half. 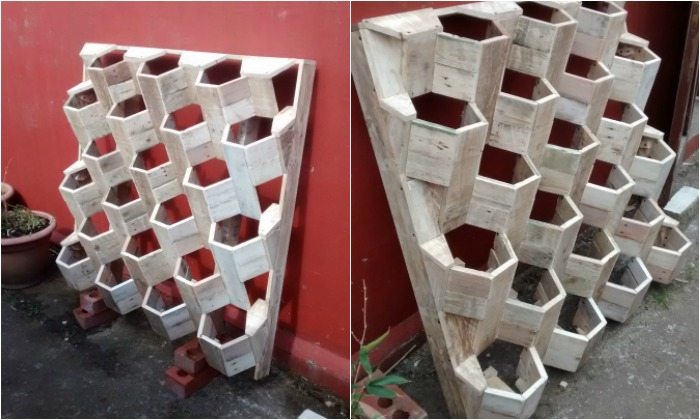 Framing the hive: I tried to keep screws and other fixings to the inside rather than the outside of this because it’s a nicer finish that way. However, at this point, it was clear to me that the hive was going to be painted. My wife didn’t like the mixed wood finish, and it was also clear I was going to need to get the filler out because of warping and differences in thicknesses of the wood I’d used. From here on, I didn’t worry too much about where the screws went, as I’d be using filler anyway. 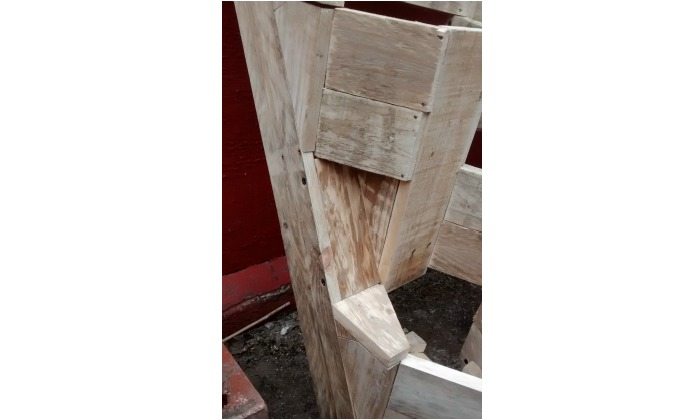 Once the hive body was complete, it was time to make it look finished and to square the whole thing up. I cut a length of 2.75″ board for the top, and one for each side then screwed into the sides from the inside of the modules. The top piece was screwed down into the sides.

This left lots of gaps, top and sides, which I filled one by one. 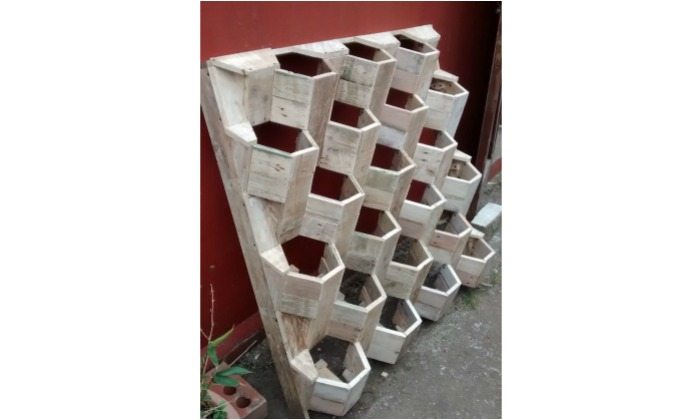 Gaps between pots on the highest layer were covered with half hexes with 30-degree chamfers to give a good fit against the top of the frame. 30-degree triangles cover the edge of the modules, and ‘quarter’ hex ledges sit above those triangles.

Attaching those took screws all over the place, and gave some more rigidity. I did split the upright of one of the modules while doing this because it was already warped and bowed before assembly. I put some extra braces on the back and got the filler out. My method of attaching the frame here was messy and awkward, and exactly the kind of detail you should plan instead of following my example.

I then filled the remaining holes in the sides of each layer with 30 degree angled triangles behind each upright, and short bits of board to cover the backs. These were mostly screwed because I was too impatient for glue at this point. There are still many holes on the undersides, which allow for drainage and airflow.

Finally, I screwed the aforementioned shelves in (just a bit of board to hold the pots up). Two screws each, from the underside of the shelf into the angled braces. 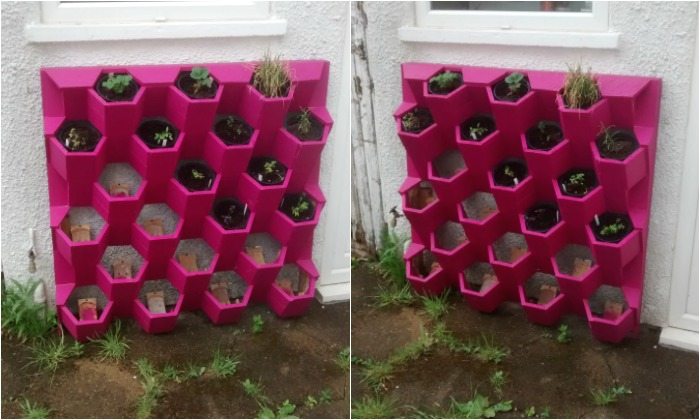 At this point, I got the filler out and spent a long time filling the cracks that opened during the framing outstep. If it’s going to live outdoors, you will want to weatherproof it somehow. I painted mine with masonry paint, which gives a wonderful finish on wood and has good staying power. 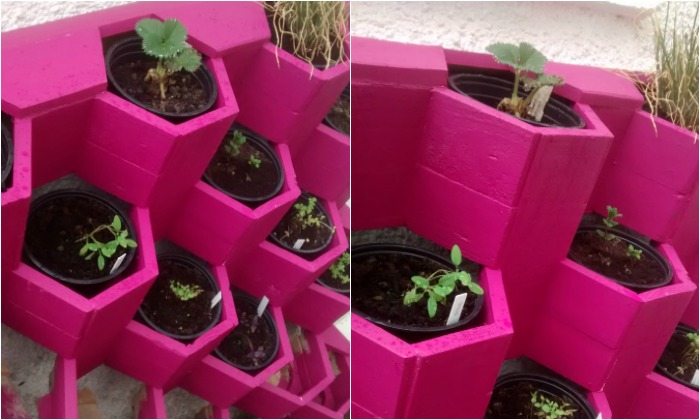 Remember to paint inside and outside, to protect the wood properly, and so that it doesn’t swell in the rain! When painting, it’s best to do multiple thin coats, after making sure that the surface is clean. This will give you a nice even drip-free finish. 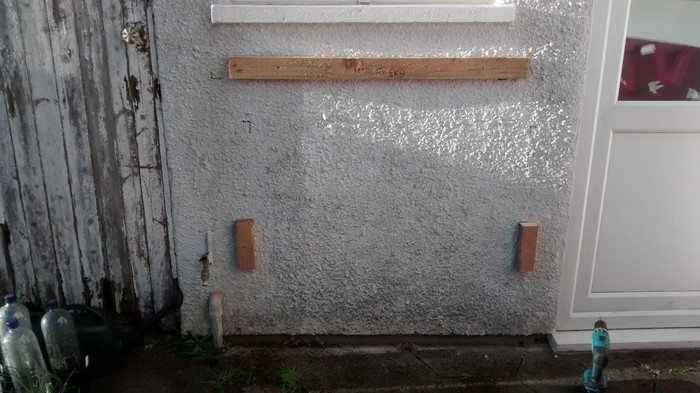 I then attached mine to the wall by screwing some thick batten (more pallet) to the wall and then screwing the hive top and sides to that batten. You could do this with french cleats, or any fixing method you want!

Touch up any paint you need to know that you’ve fitted it, and fill those holes with plants! I’ve got half a dozen basil plants, some (half-dead) chives, and some strawberries in there at the moment. The weeds in the patio are doing better than my herbs right now…

Maths! As promised, some maths here so that you can work out what sizes you need for different sizes of pots. You’ll have to put up with photos of scribbling here because MS paint is harder than a pen and my phone. Though my phone does struggle to focus without natural light. 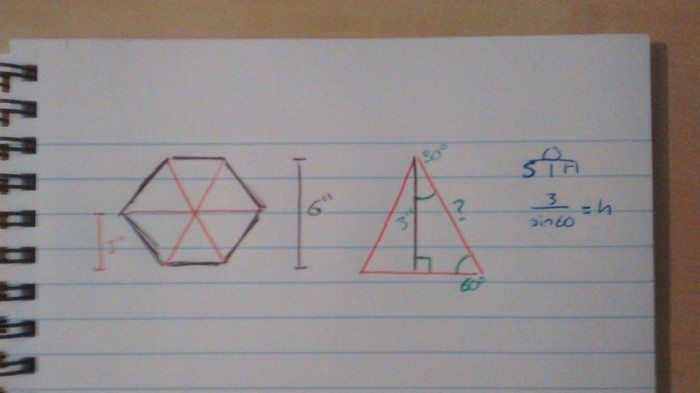 A hexagon to hold a 6″ pot needs to be 6″ at the smallest internal dimension (side to side), and we need to know the length of aside. A hexagon can be thought of as 6 equilateral triangles. If the whole is 6″ across, each triangle is 3″ high (red pen). If you cut that triangle in half, you have a right-angled triangle of 3″ on one side (green pen). 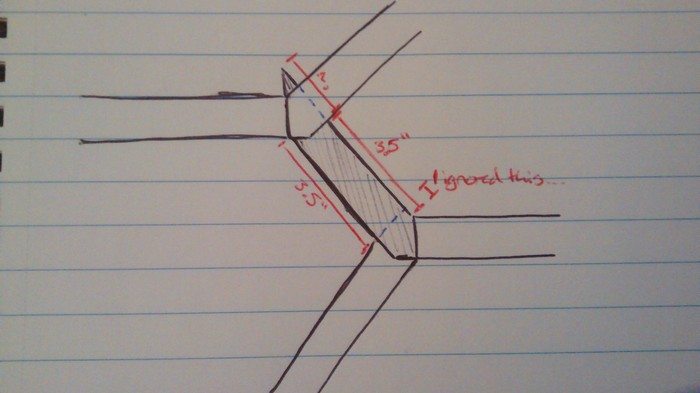 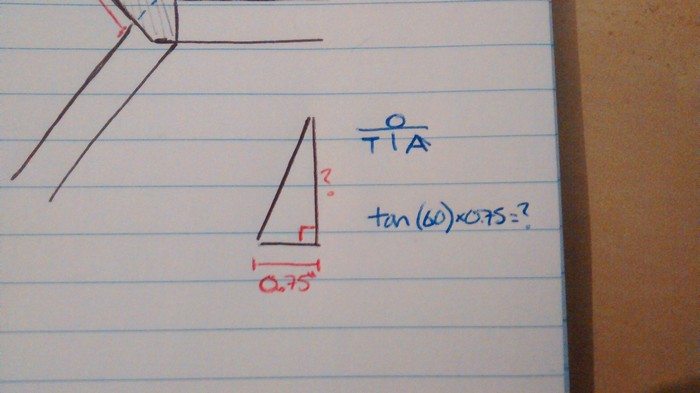 If it’s assembled like mine, there also needs to be 3.5″ between where the sides cross over each other and where they meet the uprights. This is a little more painful to work out. I dealt with this by lying to myself, and saying that I just needed 3.5″ plus the angled sections at each end, and adjusting the cut to what made it work (this also contributed to the warping in my planter). You also need to use trigonometry here. Tan(60) x Wood thickness (0.75″ for me) will give you the length of the angled section of the piece (1.299″). Double it, and add it to the width of the hex you worked out above. (3.5+1.3+1.3 = 6.1)

I really hope this step helped someone because it was really hard to write. And I still don’t think I did a good job of it.

Thanks to ratMoose for this great project!