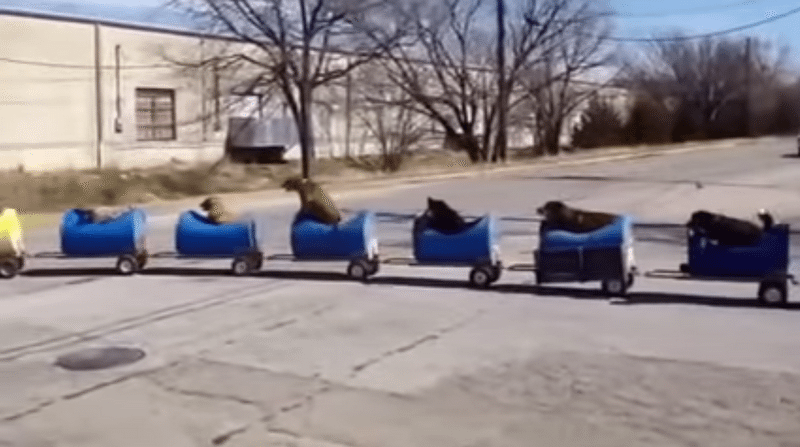 Every week, in a town near Fort Worth, Texas, a plastic barrel train carrying nine happy dogs can be seen roaming around the streets. But what makes this sight even more heartwarming is the story behind it.

Eighty-year-old Eugene Bostick retired 15 years ago, but now he’s back doing one of the happiest ‘jobs’ you could ever think of.

He serves as a train conductor where his passengers are his nine adopted dogs.

Click on any image to start lightbox display. Use your Esc key to close the lightbox. ?

Though it’s what every dog lover would want to spend their retirement years doing, Eugene never thought he’d be spending a lot of his time taking care of nine stray dogs.

In an interview with The Dodo, he shared that he and his family began adopting the dogs one after another when people abandoned them in their property. They started to feed them and give them shelter. They even brought the dogs for veterinary medical care.

But he doesn’t merely provide them with food and a roof over their heads. He makes sure they stay happy, too. He thought that while they have a large farm where all the dogs can run around and play together, taking them to different places in town would make them even happier.

After seeing a man with a tractor with carts for pulling rocks, he realized that a similar vehicle would enable him to take his dogs around.

And so the dog train was made. He repurposed plastic barrels by cutting holes in them, attaching wheels and linking them together. 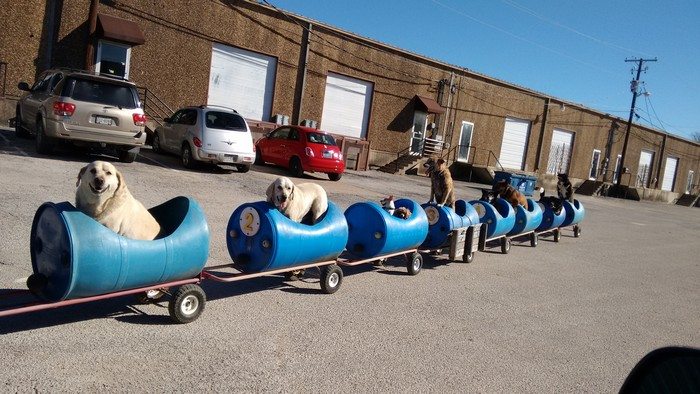 Sure enough, the dogs do love their weekly train rides. Whenever they hear Eugene set up the tractor, the once deprived dogs would automatically jump in, excited like little kids on a field trip!

You can watch Eugene, his wards and the dog train making the rounds in this video.

Thumbs up for Eugene? :)