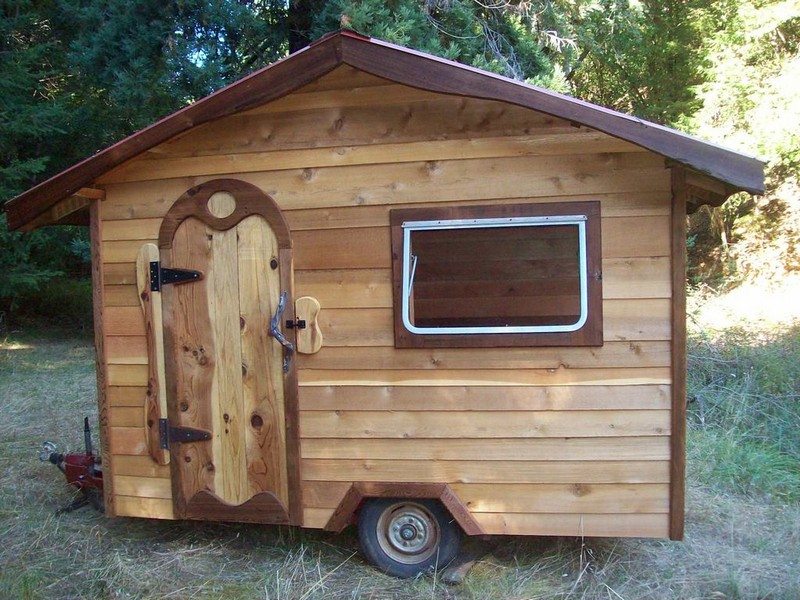 As this structure is designed for use around the San Francisco Bay area where snow load is nonexistent, we used 1×3 rafters for the roof and 1×2 framing for the trusses. As we framed it out we did our best to remove as much weight as possible while creating a sturdy movable structure, thus the use of 1×2’s, 2×2’s, and 2×3’s at different places in the frame.

We had a big stack of 1/8 inch ply ready for use so we decided to skin the structure with it for shear strength (to prevent twisting and increase rigidity). Unfortunately, the sheets were 5×5 feet, so we had to cut them to fit our random stud spacing and use two to reach the top of the walls. But they were free so we didn’t complain much. They were fastened with narrow gauge staples fired from a compressed air staple gun. This was very quick.

We chose to overhang the sheets in the corners and trim them later with a sharp handsaw. We did the same with the windows and roofline but using a Sawzall where a handsaw wouldn’t fit. The roof was decked with 1/2 inch plywood for strength and lightness.

For the exterior siding, we used rough milled cedar and fir boards of an average thickness of 1/4 inch. They ranged in width from 5 inches to 10 inches and we mixed them up randomly to give it an organic feel. These were stapled on the same as the plywood but lapped so that the staples were hidden.

In the end, we decided to go with recycled blue jeans insulation as it is much more likely to stay evenly distributed in the wall than loose wool. Although it is twice the price of fiberglass, it is so much more pleasant to work with that it was well worth it. It doesn’t cut with a knife like a fiberglass, but can be pulled apart with your hands. As the walls are going to be breathable, we did not want fiberglass particles getting into the air inside the room.

For interior siding, we chose the boards with the fewest knots and ran them through the planer and edger until they were straight and beautiful. Then we tacked them up with a finish nailer.

As we were re-using the old trailer’s aluminum windows, we made a frame with rounded bottom corners to fit it using old-growth redwood. It was tricky and it would be much simpler to install normal windows from a house.

The door was a very tricky thing. We decided that it had to be rounded as there were so many straight lines already.